Posted on January 8, 2015 by russellbruce

What price a barrel of oil? Part 1

What price a barrel of oil? – is the thousand-dollar question. One thing we can be sure of is $1000 is not on the cards. For several years, between Jan 2011 and Aug 2014, the oil price was reasonably stable with Brent crude fluctuating on an annualised price range comfortably above $100 a barrel.

Most investors and financial gurus admit they did not see on the horizon the scale of the drop in oil prices, meaning the marked downward spiral currently in evidence. Oil prices, however, change by the second so we need to look at monthly and annual trends to clear out the noise of short-term fluctuations.

Though a downward trend was in evidence and not totally unexpected, most investors were fairly sanguine, but the price has continued to fall and the markets are now spooked.

Countries have been planning their budgets based on oil at a much higher price than today – Brent crude $50.68. Saudi Arabia, for example, needs a price of $89 to meet this year’s annual expenditure budget.

So what is going on and why are prices in free fall?

Several reasons are put forward and all play a part

To understand how this will affect Scotland and the UK we need to look at the global and longer–term contexts. 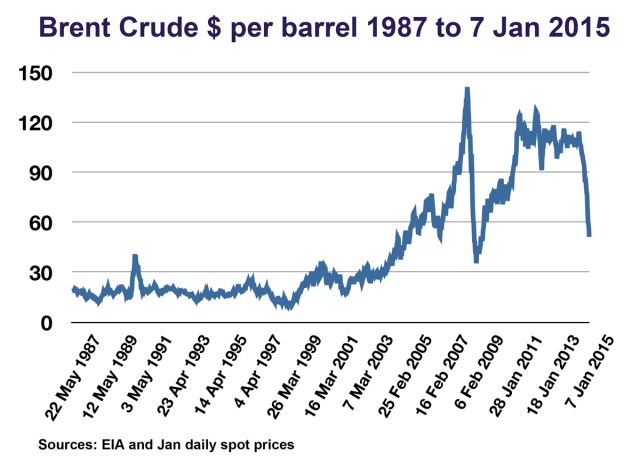 New discoveries were in deeper waters or involved more expensive operations to get at the oil and investors were willing to put money into the pockets of explorers and oil companies given the low yields on government securities such as UK gilts.

All seemed well, and investment in new technology was cutting costs to compensate for the higher costs of extraction in newer discoveries from Canadian oil sands to US shale, and offshore South America and Africa.

With the oil price having dropped below $100 in September last year and continuing to decline, OPEC met in Vienna on 27th of November.

Controlling 40% of world production, OPEC was expected to cut production to stabilise the price. Instead they decided they wanted to protect their market share and maintain production in order to squeeze high cost operators out of the market.

The members of OPEC are Algeria, Angola, Ecuador, Indonesia, Iraq, Iran, Qatar, Kuwait, Libya, Nigeria, Saudi Arabia, Venezuela and the United Arab Emirates. Not exactly a homogenous bunch, their costs of extraction vary considerably and some were less happy than others with the decision.

All are countries that need to use their oil wealth to keep their population reasonably content and that includes Saudi Arabia who were the driving force behind the strategy. The Libyan oil fields have gone up in flames. Iran faces sanctions and is reliant on a price close to $100. But what do the Saudis care about Iran?

With costs around $4-$5 a barrel the Saudis have, on the face of it, a strong hand. The strategy will cost them billions and they will have to borrow, pledge future production or use capital reserves to balance their budget and maintain their home market subsidy on fuel prices.

This is a classic production game strategy. With healthy margins you can force out high cost competitors by taking a cut in your own profit margin. With reduced competition and supply in the wake of the weeding out process, prices will rise again and market share or dominance is re-established.

The Saudis racked up the pressure just before Christmas by saying they would not change strategy even if the price dropped to $20.

Oil was still north of $70 when OPEC met, then continued to fall in the wake of the decision to maintain production. By 22nd December, when Naimi issued his blunt warning, Brent was trading at around $60.

With the threat of maintaining this strategy, even to as low as $20, there is a danger, this is perceived by the markets, as a target for stage 1 of the end game.

Things are not quite as simple as that, and the Saudis know it. Naimi was, in his December remarks, racking up the pressure to shorten what could be a protracted long-term play, as producers do not face the immediate consequences of the falling oil price.

Oil producers hedge production output so they have protection if the oil price moves against them. Most will not feel the effects for months and some well into 2015. They have some space to adapt to the new conditions and they are fighting back. Rather than wait till the hedges protecting them run out ‘they are cashing in well-placed hedges to increase the number of future barrels hedged’, according to Reuters.

For companies with strong balance sheets, operating in a sector with volatile market prices, they have the capacity to protect their core production units. Investment decisions are based on long-term production cycles and variable market prices over that cycle.

A shake out, none-the-less, is on the cards and I will deal with that in a future article.

Many reasons have been attached to the Saudi position. Any geopolitical considerations are a side issue. Saudi Arabia had 15.8% of world oil proven reserves at the end of 2013.

They know renewables and non fossil fuels are set to capture a larger market share in the long run with prices on a downward trend, even if temporally threatened by the oil price slump. They have had a long sustained period of supernormal profits and can afford this game play in the interest of maximising gains from reserves.

The UK, in contrast, has 1% of proven reserves – 90% of it in Scottish waters. We are a much smaller player. Neither the UK today nor an independent Scotland – had that been our decision – would have the muscle to play global oil politics on this scale, but we would still have a decent hand in the game.

The chart of long-term Brent crude prices shows that much of the present production was put in place against the background of much lower oil prices. New investment in maximising recovery is helped by tax breaks. Even old fields like BP’s Andrew field are secure. Andrew, first brought onstream in 1996, was linked with satellite Kinnoull, discovered in 2008. Andrew restarted production in October 2014 and Kinnoul produced its first oil in December.

Clare discovered in 1977 did not go into development until 2001. The first oil started to flow in February and has already produced around 100 million barrels. Clare is expected to continue producing until 2028. The second phase is Clare Ridge with 640 million recoverable barrels according to BP. Clare ridge will use ‘Losal’ technology – low salinity injection. Losal increases the release of oil from the substrata, pushing it to the production wells with a 40% gain in recovery levels. Clare Ridge has an expected life until 2050, but even more significant is the cost of production claimed for Clare Ridge at $3 per barrel.

The North Sea can clearly face up to the challenges ahead. Overall, our production cost base is much higher, but we are far from being the amongst the highest cost production countries.

Like other producer countries we will be affected by lower oil prices, whether that be for the short or medium term. Investment decisions are made on a long timescale and our asset base is strong and in survival mode. Never the less there will be an impact on companies that do have not the resources to sit out the price fall if their hedging positions run out before price recovery.

The Saudis are playing a dangerous game. Weak economic global recovery is not helped by the potential destabilisation of high cost producer countries and can only add to growing geopolitical tensions.